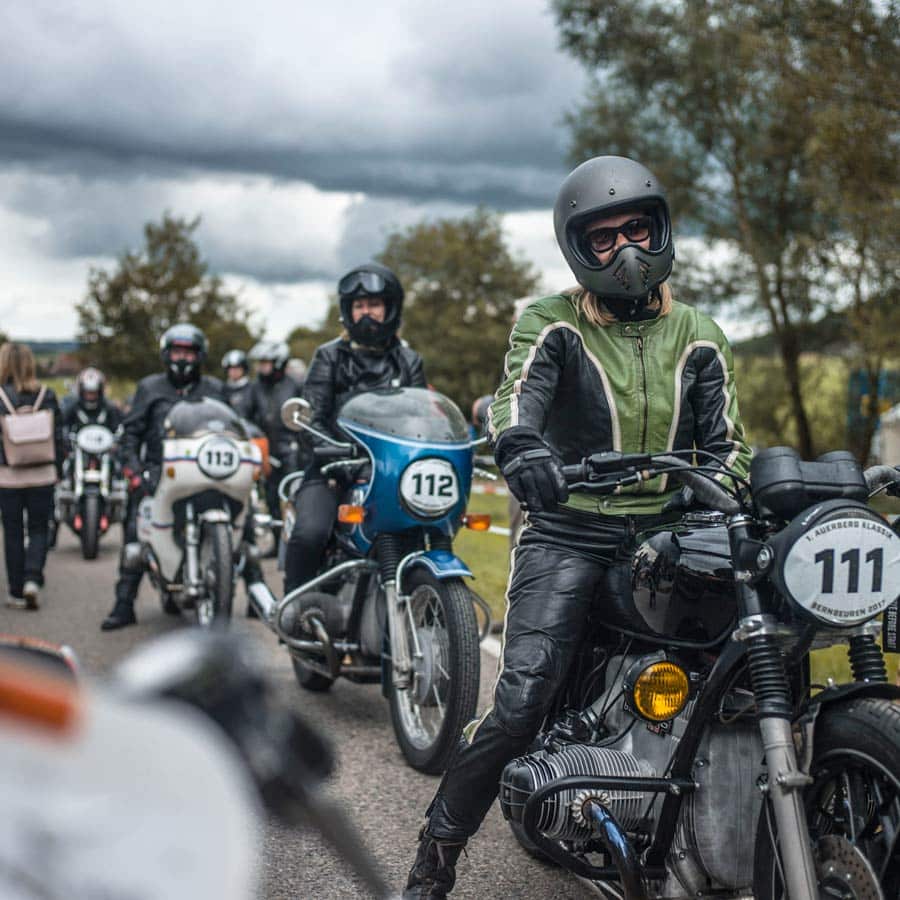 Motorcycling is a very versatile affair when looking at it as whole. There is one group among the many that is increasingly growing. Call them vintage or custom biker, many label kind-of-fit but none is really a match since this group is made up of individualists. They are united not only by riding but by maintaining and over-hauling their bikes, too. Hermann Köpf, organizer of the “Auerberg Klassik” mountain race and one of the founders of BRUMMM Magazine, a publication dedicated to motor cycle photography was kind enough to put the wrench down, wipe his fingers and punch out a few answers to our questions.

BRUMMM magazine that you publish is now into it’s fourth edition. (Three are already available in your webshop on brummm.com). What is the intention of BRUMMM?  Who is it for?

We are two guys, Christian Eusterhus and me, who started BRUMMM three years ago as a side project. We both are photographers who wanted to establish a platform for ‘motorious‘ photographers from all over the world to present their photographic works in a high-quality print product. There is so much going on in different scenes, events or garages that is barely known and not being published in regular motorcycle magazines. Also the fact that every photographer has his own point of view to capture a story – analog, digital, artistic, abstract etc. – makes BRUMMM a very special and emotional book.

We luckily were able to convince a few industry partners to support this niche product as well as independent manufacturers for clothes or accessories as we are selling BRUMMM in more than 400 shops worldwide via our distribution partner ‚Gestalten‘. We hopefully will continue for many more editions! 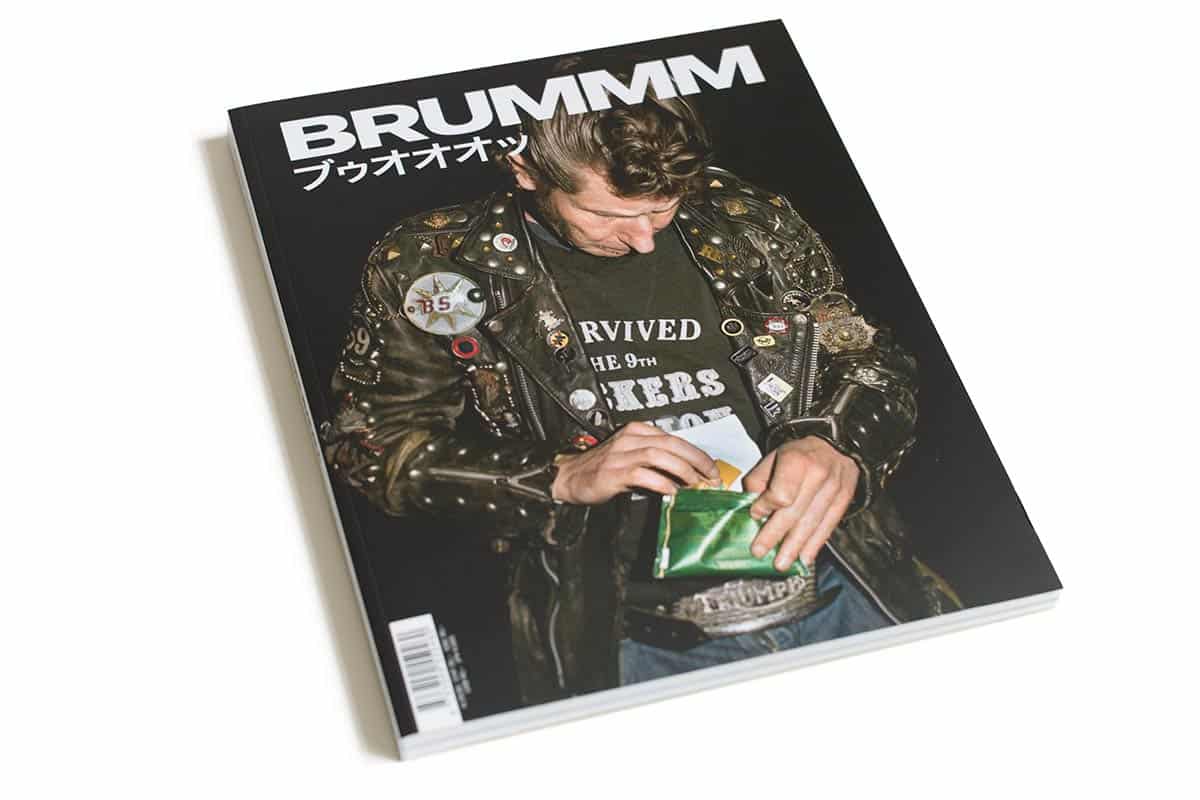 When and how did the ‘style’ factor arrive at this scene? And how sick and tired – or happy again – are you of seeing yet another photo of Steve McQueen or Paul Newman on a bike?

‚Style‘ always has played a major role in motorcycles from the very beginning and even more since motorcycles turned out to be a nice-to-have product and not only necessarily for transportation after cars became affordable. Like in many branches waves of popularity come and go, but for the last 10 years there is a very positive perception about this probably-last-legal-adventure-thing for many riders who want to experience thrill and fun after their boring 9to5 jobs. Before this current back-to-the-roots-wave motorcyclist were degraded as noise and air polluting “full-leather-hooligans” or functional “Gore-Tex-safetists” without any McQueen-factor.

Now we have such a huge variety of inspiring small businesses designing cool but armored clothes as well as customized stripped motorbikes for a growing audience who want to show their own individualism also on the road. And that’s really good!

When did your fascination for motorcycles start? What was your first motorcycle? Which is your favorite bike / brand?

– My first ride was at the age of 5 years on a 1939, 98cc Sachs Presto with hand-shift and still a pre-war-number plate on it – my friend’s father removed the saddle and put a pillow on it so we could hit the floor. Boring afternoons were killed with riding in the backyards instead of video gaming. We grew up in a small Bavarian village, where hill races for motorcycles and cars were being held until 1987, which had big influence on our lives. In my teenage years I had very different kind of bikes but finally fell in love with my first Ducati, which I still own after 28 years. Half a dozen (or maybe more?) of that brand came into my garage over the years, all pre-electronic era.

What is the fascination of turning screws, replacing parts, greasy hands and petrol fumes?

When you wrench on old jalopies in your spare time it gives balance to your (digital) day job. Diving into mechanical problems and searching for solutions is for many amateur-mechanics like I am a fulfilling mind-game. Even more if no screws are left and a motor is firing up again after overhauling it by yourself!

How many hours in a year do you spend fiddling on your bikes? What is the proportion between spending time “on” your bike indoors (mechanical maintenance) and actually riding it outdoors?

Due to one of my day jobs as freelance writer and photographer for motorcycle magazines I am in a lucky position to ride latest models in beautiful regions. Therefore working on my own projects is proportional way more than riding them on the streets. I also prefer to get thrilled in racing at amateur events on private tracks instead of riding fast on crowded public roads, which is irresponsible for all. Of course racing is dangerous too, but in most cases experienced riders are on the track and chance to get hit by inattentive road users is less. But to be honest, nothing can replace a few-days-trip with good friends to the mountains and having a good time. 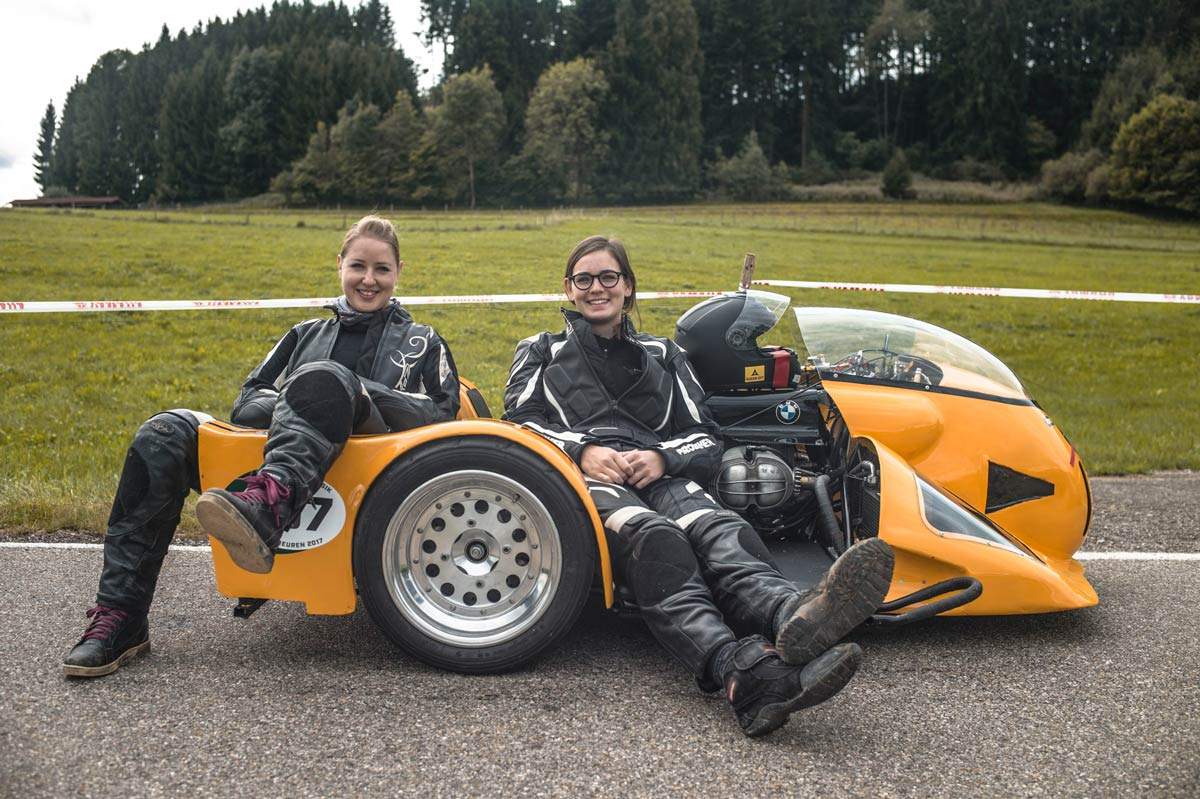 You are organizer of the “Auerberg Klassik”, can you tell us something about it?

As mentioned before I was infected by the hill-races in my home village Bernbeuren, about 1 hour south of Munich. After 30 years abstinence of motorsport events at Mount Auerberg, I thought it might be time for a revival. So i wrote a concept and asked four guys in the village if they would be interested to cooperate on this project and they all jumped in. Many hours went into organizing this from scratch, but finally in September 2017 first edition of “Auerberg Klassik” was started, exactly 50 years after first race of former Auerberg-Race in 1967 by the way. It was a very exciting and successful event, for motorcycles older than 40 years, with 165 riders coming from different countries racing in regularity mode (not the fastest rider wins, but the one with smallest time-difference between two runs) up to the mountain road with almost 7.000 spectators over cold and rainy weekend aside the track! We invited local clubs to sell food and beverage for the event and they provided about 350 helpers to make this weekend possible. Enthusiasm and atmosphere was incredible for both visitors and residents watching very closely old and rare vehicles racing 3,5km up to the mountain. We also asked visitors to dress up in period correct clothes (and to participate in best-dressed-contest) – as organizers and helpers did as well – in order to generate an classy ambience and a time travel back to good old days of hill racing history. We will continue “Auerberg Klassik” in two-years-rhythm, next event will be held in September 13-15, 2019 – so, mark your calendars and iron your shirts!

What is the challenge in motorcycle photography? I would believe it is the extreme fast movement of a relatively small surface in front of blurred backgrounds, lets do some nerd-talk …

– Absolutely! It is way more emotional and direct as the rider is not in a cage compared to a car driver. And the physical fact, dynamics of cornering motorcycles are more spectacular when the bike is on speed is a challenge to capture a good photo out of a car’s trunk. Or when sitting backwards on a motorcycle rear seat, strapped with a belt to rider not to fall off the bike! And again, you will get 10 completely different results if 10 photographers will shoot same story. There are so many different ways in photography – action with 300mm lens, emotion with rangefinder 35mm, abstract 6×6 black and white, etc. – That is exactly what we want to present to our audience with BRUMMM: A carefully selected group of talented photographers and a surprisingly bandwidth of stories and styles.

More Makers Interviews? Find out everything about the New Heritage and the homage to Quality, Handcrafted and Timelessness.