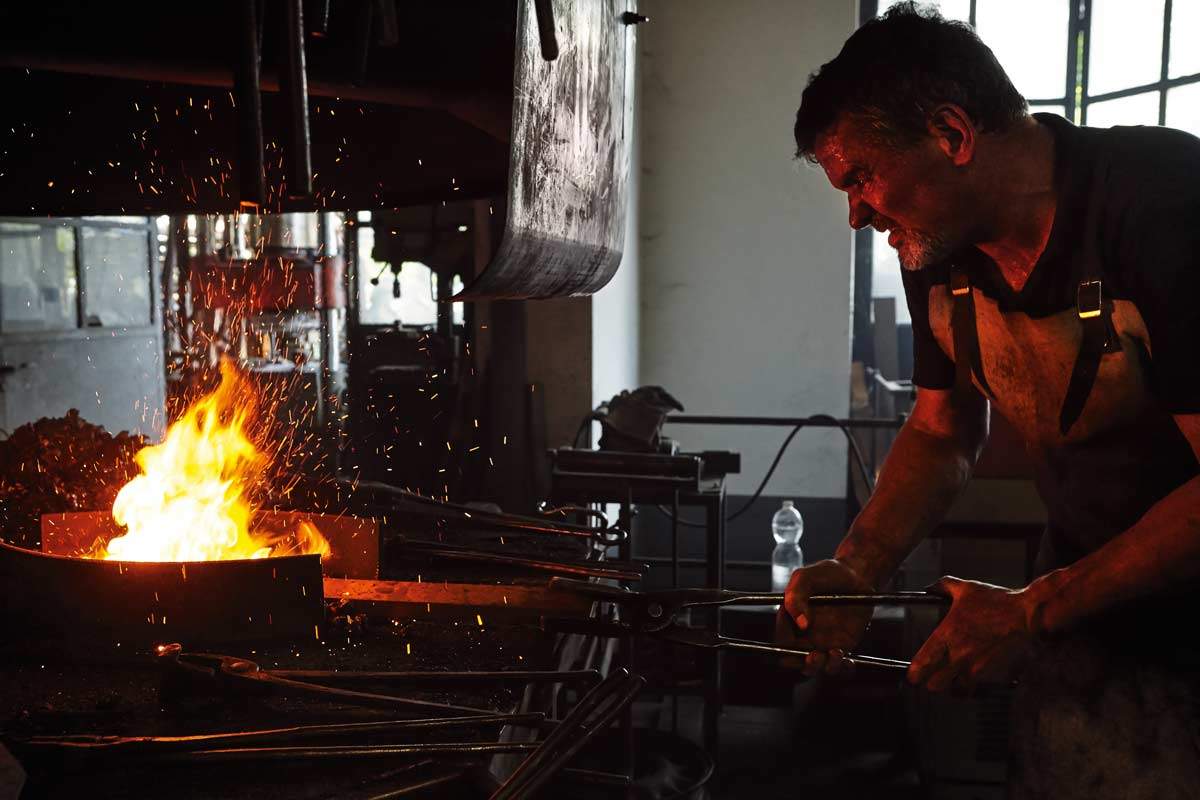 From Munich to Lana – A trip to South Tyrol

Robert Condin, sculptor from South Tyrol is one of our ambassadors in our latest edition “The Alps”. These ambassadors represent a certain aspect and point of view in our books.

The Alps, an environment that has formed rocks and mountains both fascinating and unique, has shaped those living here as well. A very special kind of man is produced by these vistas. The South-Tyrolean Robert Condin is such a character. His material of choice is metal, but the element that formed him, is definitely rock.

Robert Condin from Tramin. – Read the full story in our book Makers Bible The Alps – Robert was trained as a machine locksmith, a blacksmith and later a studied sculptor, the harsh nature of metal that Robert took on as the material of his life, both professionally as well as artistically has formed a strong man with a sensitive mind.

We have met Robert three times to talk about his life. We were in search of the “mountain mentality”, the question whether the harsh conditions and the remoteness of living in the mountains does something to the way people work, what they produce and generally, how they are? Robert was an excellent partner who warmed more and more to the idea that we were after. He did provide answers from his own point of view and opened our senses in further talks with other ambassadors that followed.  Robert opened his artist’s forgery and let us witness the forming of glowing metal. He was supported by his assistant Isidor.

People we met and talked to with the purpose of understanding the subjects of our books better and be able to document different perspectives.

Besides Robert Condin, who is represented by Maxburg Gallery in Munich we also collected other angles and views like those of design and furniture publisher Nils Holger Moormann. NHM told us about settling-in as an outsider into the Alpine society; or artist & designer Rolf Sachs who grew up in various places in the Alps, travelled and lived around the globe and yet claims the mountains his home. From him we got a perspective of life in St. Moritz. We also spoke to an Alpinist: Stefan Siegrist is someone who climbs mountains “because they are there” and makes a living out of it. Torben Hansen is from Denmark and the absolute expert in wood, a very typical material of alpine interior and exterior design and architecture who told us about his philosophy on treating this natural material right. The Alps without food would be an incomplete experience; we visited Milena Broger, Austrian chef and a little legend in the Arlberg region where she cooks in winter. We met her in her summer location on the island of Bornholm, to talk about the Alps and alpine cuisine.

Manufacturing of the legendary Mercedes-Benz G-Class

From Munich to Lana – A trip to South Tyrol

Subscribe now to get notified about exclusive news every month.