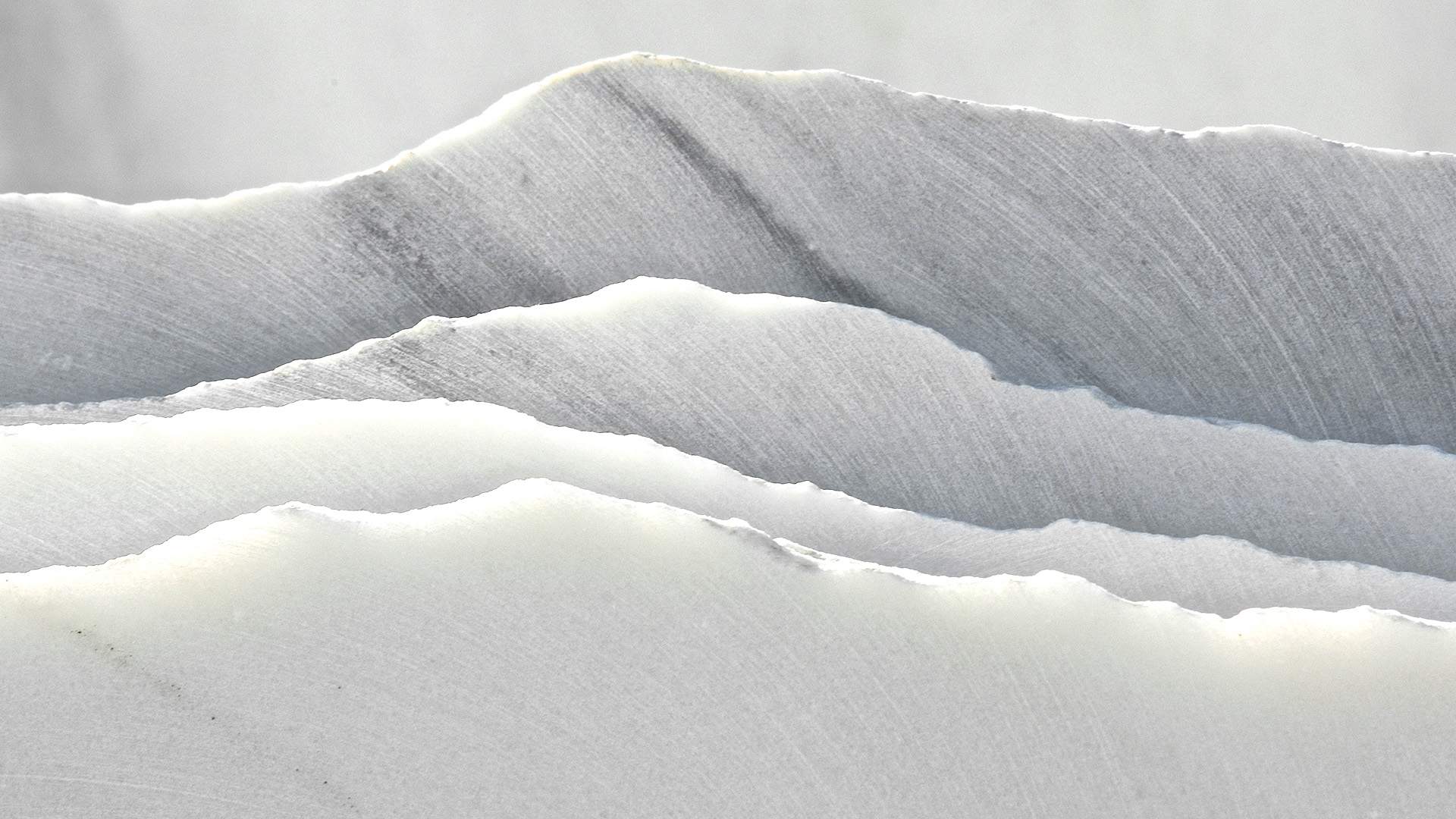 The white marble quarried at Lasa Marmo is literally a piece of South Tyrol for the world. Currently, the most spectacular building made of just this particularly hard marble is located at Ground Zero in New York, the Oculus Station in South Manhattan, where the Twin Towers once stood. Also the Pallas Athene Fountain in front of the Parliament in Vienna or the Queen Victoria Memorial in front of Buckingham Place in London are made of this sublime Vinschgau stone.

We were allowed to visit the production and inspect the quarry. In doing so, we naturally wanted to pursue the question: How much manual labor was and is now involved in the business with white marble?

The marble factory in Laas directly on the Adige River is impressive when the sun is shining and the marble is radiant – and a logistical masterpiece is always happening there. For example, the cut marble slabs intended for complex building projects and cut to size are scanned and can then be planned completely digitally on the computer for the customer’s projects. Everything is then “packed” into containers in reverse order so that the slabs can be unpacked the right way round at their destination and installed straight away.

Of course, machines have long since facilitated every step of the work. Not only for health reasons, but also for economic reasons. The sawing into panels, the polishing and the milling of certain shapes. Grinding machines, which are held in the hands, are used for precision work. Nevertheless, a stonemason and, incidentally, the stone(wo)mason who has been wielding the grinder at Lasa Marmo for 20 years, all began their training by hand, with a chisel. The hardness of the material, however, dictates the machining. Anything else makes no sense here.

Underground at an altitude of 1500 meters

The quarry where the Lasa marble has been quarried for over 100 years is located at an altitude of over 1500 meters in the middle of the Stelvio National Park. The sight is breathtaking, whether you are just fascinated by the natural aesthetics of the rock or admire the boldness of the quarrymen – and since 2021 also the first female quarryman – who lift the white rock out of the quarry.

The traces on the walls leading into the quarry already bear witness to history. The first meters show almost delicate traces, here at the very beginning, by hand, relatively small blocks were cut almost exclusively for sculptors. Especially for the Habsburgs in Vienna who had themselves chiseled into the brilliant white marble and had these statues set up in their empire. This was followed by vertical “channels”, which indicate the use of hammer drills, also operated by hand.

Then there was a period of blasting into the mountain. This was dangerous, expensive and quite inefficient, because the marble was always damaged. Today, gaps are cut in the marble to the required size, and a metal cushion is then squeezed into that gap. When this is in place it is filled with water at high pressure until the stone gives way. In this way, the block is exposed on three sides. Now the only thing left to do is to detach it from the wall behind it. For this purpose, diamond-proof steel cables are used, which reach behind the marble block by means of pulleys and detach the back from the mountain.

The blocks are then transported to the valley by truck. The number of cubic meters that may be lifted per year is limited, so that subsequent generations may still break the white marble here.

Unfortunately, it is not possible to enter the quarry, but the Marmorplus association offers guided tours of the marble right up to the entrance.

You now have the chance to pre-order the South Tyrol Guide, before the regular publication in July this year, at the discounted price of 20€!