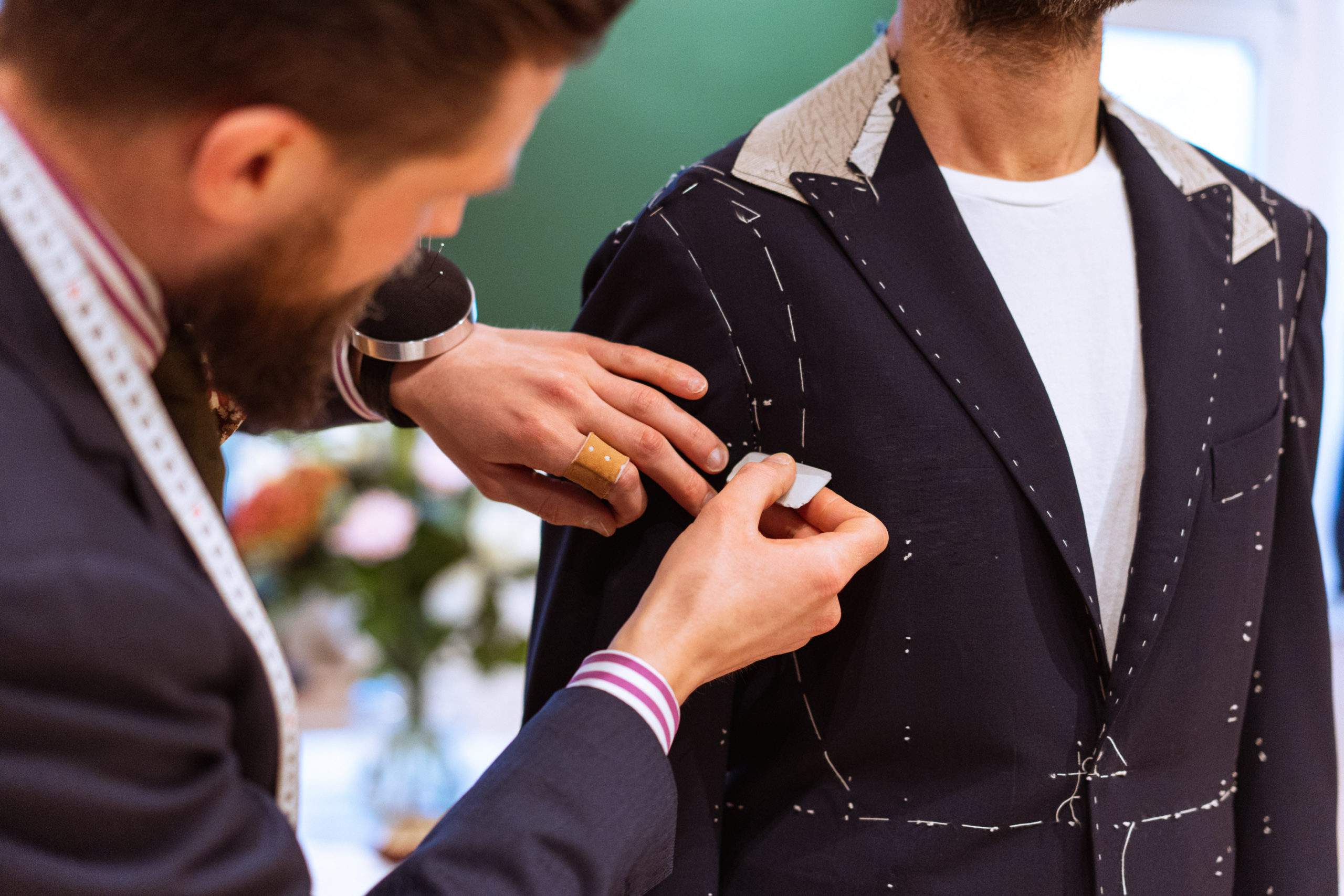 Contributed by: Sandro Dühnforth, Chairman of the Association of Men’s Tailors

Even today, the “real” tailor-made suit stands in its aesthetic and cultural value as an example of the high-quality work of the men’s tailoring trade. At the same time, a suit made by a men’s tailor always guarantees a sustainable and high-quality product made of natural components such as wool, horsehair and stiff linen. The special craftsmanship skills of men’s tailors include – in addition to advice – taking measurements, creating an individual pattern, cutting by hand, joining the base and outer fabric by needle, thread and hand, dressing (ironing into shape) the fabric, correcting the garment during fittings and, of course, the proper care and repair of the finished garment.

The first heyday of purely artisanal men’s tailoring ended with the invention of the sewing machine in the mid-19th century. Nevertheless, the craft continued to exist nationwide until the 1960s. Whereas in 1949 there were still 45,506 tailoring businesses nationwide, there are currently only about 60 bespoke tailoring businesses left.

At the same time, the tailor-made suit is still considered the highest-quality and most individual version of the garment. The craftsmanship that goes into one of these pieces requires years of practice and a psychological intuition that work together to ensure that the finished garment fits the physique and character of its wearer. Thus, the job description has an artistic dimension as well as a purely economic one.

The role that the craft has always played in art and customs is significant: Icons such as Fred Astaire or Frank Sinatra and figures such as James Bond would have remained unthinkable in their effect without made-to-measure clothing. Countless other stage and film characters owe their credible portrayal to the craftsmanship with which their costumes have been tailored. Likewise, regional traditional costumes and carnival costumes are inseparable from the active craft of men’s tailors and thus continue to be a living everyday culture.

Discreet elegance for the new customer

The demands of the clientele have increased due to individualisation processes and fashion influences. Today’s tailors have to master a wide range of cuts, lines, patterns and colours. It is important to depart from one’s own ideal and to explore the customer’s style with empathy. The suit must form a symbiosis with the wearer and thus becomes a subtle means of communication. German men’s tailors work in the awareness of covering a particularly wide range of the demands their profession places on them.

Nevertheless, most tailors base their work on a discreet concept of elegance. They concentrate on making many details as perfect as possible, details that are hardly noticeable in the end, but which make all the difference to connoisseurs. The perfect buttonhole, the impeccable sleeve fall and the hugging of the seam lines to the body are principles of the craft that have been passed down from master to apprentice for centuries.

Sisyphus in the men’s tailor

The classical businesses are also united in their approach by an ideal core: the constant striving for perfection in the knowledge that it can never be achieved. Firstly, the work done by hand can never be completely even; secondly, the finished garment must lie on the body with so many different activities, so that it does not appear perfect in all positions. Nevertheless, a men’s tailor will try to get as close as possible in terms of lines, materials and finish. In addition, the tailor always has to keep up with fashion developments and needs, so he has to learn with every piece. The motivation for all this can only come from passion, money alone is not enough.