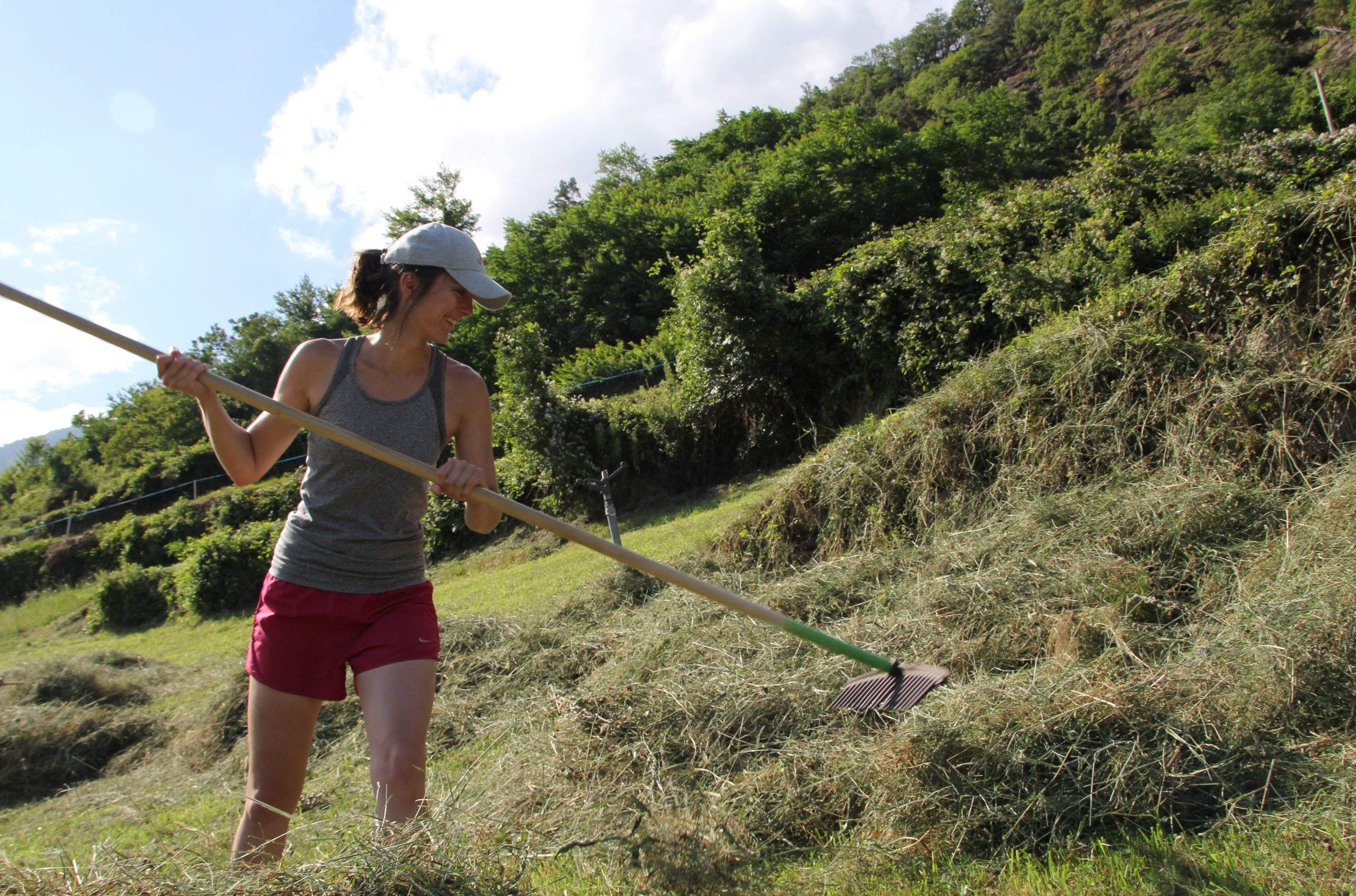 Your South Tyrolean holiday could also look like this: Hard work instead of idleness, with simple food and a daily routine that is based solely on the hours of sunshine. In the midst of nature and in front of a huge mountain backdrop, look after animals, get to know locals and make relationships for life. In the evening, exhausted, you fall into bed – and weeks later, long since back in the office or home office, you long to return to the farm. Because the work there has brought more than it has cost in effort. And your own head was a little freer.

If you have ever wondered what life and work is like on a real mountain farm beyond the thousand metres of altitude, you should contact the Bergbauernhilfe. The non-profit association is concerned with the preservation of farms – and thus also with their own cultural heritage. The Bergbauernhilfe will tell you about the conditions, advise you on what might suit you best, and if you are genuinely interested, they will put you in touch with the farms in question. You have to work for a minimum of one week, free of charge. It is also interesting to read the experience reports on their website before the interview.

In fact, the South Tyrolean mountain farms are lacking hands-on workers due to the exodus of young people. The drop in prices on the agricultural market and the hard, but relatively low-yield work high up in the mountains do the rest. Since 1996, BERGBAUERNHILFE has been trying to counteract this. After all, a farm is first and foremost a home for the people who live there. But it is also a place of work in and with nature, which is absolutely necessary for the people down in the valley.

There is work all year round, but the main season is between June and September, when the harvest is brought in. The work is mainly done outside on the pastures or in the stables. But help may also be needed in the kitchen or in caring for the elderly and impaired farm residents and children. The area of work depends on the talent and aptitude of the applicant.

The work up there brings more than it costs in effort

Hay is the food of the animals. Especially in summer, it is stored for the hard winter months. To ensure that nothing rots, it must of course be dried by the sun beforehand. There on the steep slope meadows where the grass grows, it has to be turned after mowing as long as the weather remains stably sunny. It is quite an effort to handle the pitchfork all day on the sloping hillside. Although machines can help, it is really good old-fashioned manual labour – so remember to wear gloves to prevent blisters!

Especially in September, helping hands are urgently needed when the all-important second cut has to be brought in.

The day begins – and usually ends – with a walk to the barn. Mucking out, for example, between the cows or goats that remain in the barn. Here, too, you can make “friends”, especially when it comes to feeding the calves. Collecting eggs from the chicken coop and caring for the hoofed animals are also part of the duty roster. Milking is only part of the voluntary work schedule on a few farms. This is simply because it is usually a matter for the boss and also requires a lot of tact.

Wood is a universal material on a mountain farm. Similar to hay, firewood for heating has to be cut in the summer months, split by machine and then stored. But it is also needed to put up fences: Every year, many fence posts are knocked down by fallen snow or avalanches sliding downhill, destroying the boundaries of grazing areas for the animals. Of course, these first have to be made into posts from the trunks of smaller trees: Debarking and sharpening, transporting them to the mountain and then hammering them in. The apparently quite simple work process is, however, the number one cause of sore muscles – at least that is what is written in the many reports of mountain helpers’ experiences.

Depending on talent or physical condition, but also depending on the weather, there are plenty of other tasks to be done inside and around the house. For example, cooking. Because of all the physical work, you should eat a few calories three times a day. Of course, there are also farm residents who have to be looked after because of their age – children or the elderly – or with physical limitations, especially since farmers usually have enough to do outside. This includes chopping wood into stove-size logs and then piling them up, as well as taking care of their own cultivation in the garden.

One should not be afraid of working with one’s own hands. Debarking fence poles, turning hay, mucking out the stable and feeding the animals, cooking, household and garden work are all on the agenda here. It is not only the hands that get busy, it is above all the mind and heart that are revitalised in the long term. All participants report that working on the mountain farm has broadened their horizons. This is also based on reciprocity – for example, many farmers welcome the fact that their children also have to deal with “supposed strangers” and learn how to deal with them.

So the next time you are in South Tyrol, standing in the valley, craning your neck and looking at the majestic farms perched on the steep slopes, pick up our book again or type in “bergbauernhilfe.it” on your smartphone. Perhaps this is the moment when your next “holiday planning” takes on a whole new perspective.

Our Books
Our Videos